Sie sind hier: Startseite • Current news • Relocation of the Eisenbahnstraße in the Primsaue commercial area in Nalbach by LEG Service

In the context of the revitalization of the Primsaue commercial area in the south of the community, the community of Nalbach also had the local Eisenbahnstraße rerouted. Commissioned with the associated project management was the SHS subsidiary LEG Service. On November 16th, mayor Peter Lehnert officially opened the Eisenbahnstraße. Together with the enlargement of Primsaue II and the construction of a roundabout, the relocation of the road was part of the upgrading of the commercial area. The project was subsidized by the Economics Ministry  under the State Program for Improving Regional Economic Structures.

The relocation enables the development of new respectively the optimization of already existing commercial areas and upgrades the whole area. To date, the Eisenbahnstraße led through the factory grounds of Betonwerke Tritz. This fact affected the entire traffic, for public and factory traffic met here. Moreover, the access to other local companies and the municipal work yard was restricted.

The new Eisenbahnstraße, which is 530 m long, 5.90 m wide and provided with a sidewalk on one side, is now designed for two trucks to meet. It goes to the south parallel to the DB railway tracks. This change of route solves the existing traffic problem, so that it is no longer necessary to drive through the Tritz factory grounds . Moreover, the street is now open for public traffic.

The street drainage is done by means of drains and channels connected to a new rainwater sewer.  The new channel will be linked to the Totlachgraben. The existing piping of the Kindelfloß was repaired in the course of the measure.

In line with the underlying construction timetable, it took almost nine months from the start of construction work to completion. Construction costs for the road relocation amount to 1.1 million euros 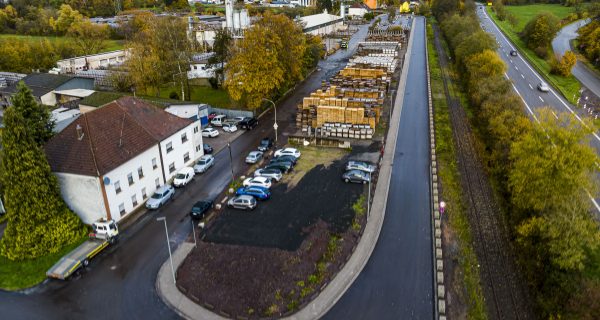