Sie sind hier: Startseite • Current news • A sure path into the future

A sure path into the future

A contract for installing an EMAS system is signed at SCN

Saarbrücken Airport is becoming the first commercial airport in Germany to be equipped with an engineered materials arrestor system (EMAS). The relevant contract between SCN’s operating company fh Saar and a working group made up of KIBAG Airfield Construction (Zurich) and Runway Safe (Gothenburg) was concluded on Friday 14 December 2018.

The signatories were CEOs Rita Gindorf-Wagner and Thomas Schuck for SCN and Philipp Althaus and Johan Lansberg for the company charged with execution of the contract.
Chairman of SCN’s board and state secretary Jürgen Barke was also present at the contract signing.
Saarland’s Ministry of Economic Affairs earmarked the funds required for the investment in 2017. For Barke, the EMAS system represents ‘additional security’ for passengers. ‘This multi-million investment in the future shows that Saarland’s state government has once again recognised the airport’s importance for Saarland as a business location. EMAS and the recently commissioned remote tower also make our airport a role model for other airports in Germany and Europe’, Barke explained.

EMAS systems to prevent overruns have been used in the USA since the late nineties, including at major airports. The system being employed at SCN was developed by the Swedish company Runway Safe as part of a Scandinavian-American partnership in 2007, and was approved by American aviation authority the FAA and then granted international approval under the name greenEMAS.

Innovative and forward-looking investment
For CEO Johan Lansberg, this first ever installation in a German commercial airport is hugely important: ‘The installation of greenEMAS at Saarbrücken Airport is of strategic importance for both Runway Safe and the safety of passengers in Europe. This is our second contract on the European mainland, after Zurich Airport, and represents the beginning of a new era of expansion for our company and the industry with further EMAS installations in Europe. Saarbrücken Airport and Runway Safe share the same values when it comes to safety awareness, innovation and sustainable solutions. We are delighted to be able to sign this contract for the first EMAS installation in Germany.’

Runway Safe’s greenEMAS is a connected track made of recycled foam glass (silica foam) 85 metres long and 45 metres wide, positioned in the runway end safety area (RESA) at the western end of the track (direction 09) and anchored with a special grid construction. The side edge, which is 36 centimetres high, is equipped with ramps.
Foam glass possesses a closed cell microstructure, making it extremely light yet resistant to water absorption, extremely resistant to chemicals, and fireproof. A geotextile is laid on top of the foam glass and covered with a sheet of a material containing cement. This sheet is sealed and the surface is coated with an acrylic-based paint.
An EMAS significantly improves the effectiveness of the emergency ramp: an aircraft travelling at a speed of up to 55 knots (102 kph) is stopped without damage to the chassis.

Swiss company KIBAG Airfield Construction is responsible for the system’s installation. In the words of CEO Philipp Althaus: ‘We are delighted to be able to install a greenEMAS in Saarbrücken together with local partners. For us as a Swiss family company, it is a particular honour to be increasing the safety of Saarland’s airport. We will do our utmost to provide the highest possible quality of installation for the system, to keep maintenance and repair costs low.’

Other key work in the second half of March
The EMAS construction project at SCN airport has been meticulously prepared well in advance, and recommendations were voiced by the European Aviation Safety Agency (EASA), the German Federal Ministry of Transport (BMVI) and the State Aviation Authority (MWAEV) even before the specific planning phase. The Vereinigung Cockpit (VC) association actively welcomed the measure.
Saarbrücken was will be closed for take-offs and landings from 11 to 30 March as a result of the construction work.
The airport will be taking advantage of this unavoidable two-week hiatus in flight operations to undertake other urgent work both indoors and outdoors within a short time frame. SCN’s CEO Thomas Schuck said: ‘Efficiency and our passengers are equally important to us. A concentrated approach to other urgent work in the second half of March is an organisational challenge, but will ultimately be more cost-effective than gradual completion. In doing so we will be able to avoid inconveniencing passengers with building works, in particular during the busy summer months.’
Specifically, parts of the main electrical distribution board will be replaced and a new cable run will be laid from the terminal to the emergency ramp on the western end of the runway. A new instrument landing system (ILS) will also be installed on the western end of the runway. Outside, an alarm system will be renovated and car park P1 near the terminal will be completely refurbished.
In the terminal, activities include extensive maintenance work on the baggage handling system. Dismantling advertising panels on the eastern side will allow the attractive architecture of the glass façade to once more shine through.

Despite the lack of any take-offs or landings, the terminal will remain open from 11 to 30 March 2019, and in particular its travel agencies and the SCN information office. 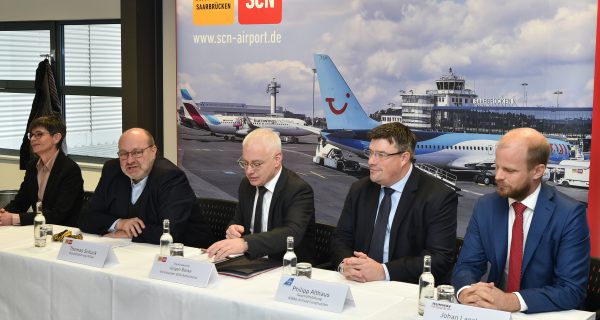