Another milestone in the establishment of SVOLT’s battery production in Saarland: On December 9, 2022, the two managing directors of the project company Batteriefabrik Heusweiler (PBH), Rita Gindorf-Wagner and Thomas Schuck, and SVOLT, represented by Kai-Uwe Wollenhaupt, President of SVOLT Europe , Zhang Feng, COO of SVOLT Energy Technology Company Limited, as well as SVOLT Europe Vice Presidents Maxim Hantsch-Kramskoj and Andreas Weiglein symbolically signed the lease agreement for the future module and high-voltage battery factory which is being constructed on the site of the former Laminate Park in Heusweiler-Eiweiler. By the lease agreement with a term of 15 years, the contract partners underline their strong will for a long-term cooperation, which is given even greater weight by a possible right of first refusal.

Minister President Anke Rehlinger and Economics Minister Jürgen Barke attended the ceremony in the new SVOLT offices in Heusweiler, where the first employees have already moved into. The official, formal signing of the lease agreement by SVOLT had already taken place on October 28 and had been confirmed by PBH on November 3.

Timeline for using the office and production rooms

The basis for building the factory is the masterplan mandated by gwSaar and developed under participation of SVOLT in 2021. The necessary conversion measures on the Heusweiler site are executed by the company Goldbeck as general contractor on behalf of PBH, which is a spin-off of SHS Strukturholding Saar. The aim is to continue using the existing buildings on the site in an optimal way in terms of sustainability and to reduce conversion measures to a minimum. So, the centrally located building complex with a total size of about 23,000 m², the gate and the administration building will be preserved.  Some areas were removed to create space for new buildings of a size of approx. 13,000 m² as well as necessary logistics areas and outdoor facilities.

The first part of the building (Production 1) shall be used from April 2023, the other building parts will follow step by step by December 2023. The final completion is contractually agreed by mid-2024. The new administration building has already been occupied by SVOLT employees ensuring efficient on-site cooperation with the project partners PBH and Goldbeck. 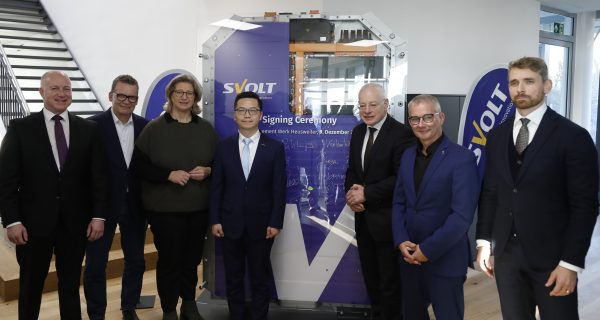 1 Photos
« Back to current news