`May we present: Sarah, our new virtual assistant`. On October 13th at the Ministry of Economics, Labour, Energy and Transport, state-owned Saarland Economic Promotion Corporation, gwSaar, will present to the press a new tool to complement its location marketing: Sarah, the audiovisual information system and new face to actively approach investors. In three languages, Sarah provides support to companies interested in Saarland, asssists them in establishing the first gwSaar staff contact and actively promotes the business location Saarland.

Minister Rehlinger puts this in a broad context: `Saarland has a long history as a central location in the middle of the European economic area. For 60 years now, state-owned Saarland Economic Promotion Corporation has promoted Saarland on a national and international level, thus providing for many successful company relocations – always by using modern tools. Marketing tools such as `Sarah` are perfect hightech solutions, yet human and hands-on. Consistent with our country and our business location.`
`This year, already 22 companies with the prospect of about 1,000 jobs have become relocated here. Sarah is an effective and living support when it comes to drawing attention to our all-round services. Saarland is a German state where decisions are taken faster than elsewhere. And that´s also the principle on which the first contact with gwSaar works. Our response speed will surprise you`, so gwSaar´s Managing Director Thomas Schuck at the presentation.

Instead of an automated voice, it´s a friendly young lady at a desk that speaks here with pronounced facial expressions and gestures. At events and exhibitions, this attracts attention to herself and, before all, to the location Saarland. On waist level of the desk, there is a buttonboard controlling the selection of language. Available languages are German, English and French.

Sarah with her proactive speech shall now be placed at exhibition stands and events, the Saarland Representation in Berlin and the Saarland Economics Ministry where she will appeal to interested passers-by. Next Monday, at an international conference at the Saarland Representation in Berlin, she will go into action for the first time. The system was developed by Tensator, one of the world leaders for customer guidance systems on airports.

Quick answers 24/7 for investors
On front of the desk, there is a slot where interested persons can put their namecards. In short intervals, the cards are passed on to gwSaar´s Berlin office where the quick and competent processing of the request starts. A guaranteed 24/7 availability is ensured by the company´s project management which, besides exactly defined communication processes, also includes the close cooperation with a thoroughly instructed callcenter. The callcenter passes on the contact information of all incoming calls to gwSaar´s Berlin office which, in turn, responds to the request of the potential investor by 05:00 pm on the following day at the latest.

The inner life of `Sarah`
Her `inner life` consists of ingenious technology. So, the front section is equipped with a sensor, several speakers and fans as well as a projector that projects `Sarah` with a size of 1.70m onto the acrylic glass pane installed behind. She is a real person, an actress, with whom state-owned gwSaar has realized trilingual studio shots on the location Saarland. If a person enters the sensor area, she `wakes up`and the film starts. So, potential investors can directly learn more about Saarland and contact gwSaar. 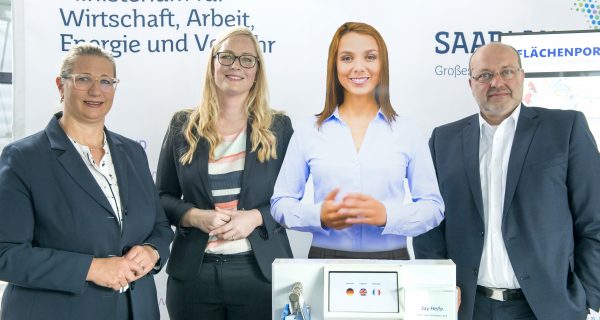