This has been a success story in multiple stages: it all began in March 2018 with an announcement by Europe’s leading kitchen manufacturer nobilia that they would be building a brand new factory on a nearly 30-hectare site at Lisdorfer Berg in Saarlouis. The next step came two years ago almost to the day, on 4 May 2019, with the ground breaking ceremony – and now production has begun as of 19 May 2021.

This move, bringing with it the prospect of 1,000 new jobs, was supported by gwSaar from initial contact onwards. The gwSaar Saarland Economic Promotion Corporation was also responsible for developing the nearly 100-hectare Lisdorfer Berg site as part of the Saarland industrial areas master plan.

Owner and shareholder Werner Stickling came to Saarlouis for the ceremony, along with his daughter Marion and the entire executive management of nobilia. Prime Minister Tobias Hans and Minister of Economic Affairs Anke Rehlinger were delighted to accept their invitation, as was Mayor of Saarlouis Peter Demmer.

Dr. Lars Bopf, nobilia’s management spokesman, explained the reasons for choosing Saarlouis as their new site. He cited the excellent transport links, especially as regards exports, and the skilled workforce – including in nearby France. Lars Bopf also detailed the openness, flexibility, short distances, and the many small but vital pieces of support received from Saarland’s public authorities.

These strengths were also highlighted by the Prime Minister and the Minister of Economic Affairs. Anke Rehlinger emphasised the role of gwSaar, which was key for both this and many other major moves. ‘The crucial factor is that we are able to provide potential investors with all services they need from a single source, and with a single point of contact. gwSaar fulfils this role exceptionally well with a small but extremely effective team.’ Tobias Hans noted that ‘nobilia is the largest move for a long time, and has become one of Switzerland’s 15 biggest employers’.

Lars Bopf cited yet more factors: Trial operations were begun around a year ago with 100 employees. The modular construction of the highly automated production facility enables a mode of operation tailored to requirements, with appropriate staff increases. At the final expansion stage, the aim is for 1,600 kitchens to be produced in Saarland every day at a site more than 100,000 m2 in size. The impressive production hall is 600 metres long and up to 250 metres wide. The factory is structured for growth – and, Bopf added, the aim is to achieve rapid growth in Saarlouis. 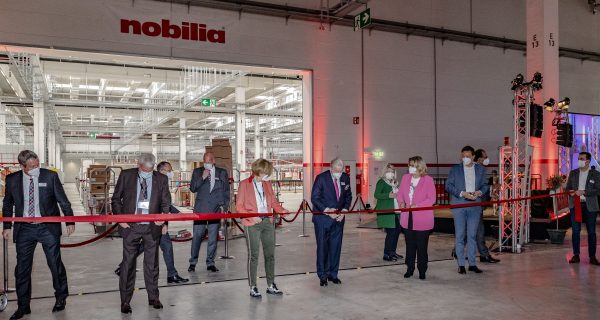