Following the work at the new housing area Kollwitzwiese – an extension to Wohnstadt Süd – LEG Saar has now donated five trees for the neighboring Schule am Warndtwald in Überherrn. In doing so, also the school´s particular cooperativeness during the planning and building phases of the said two housing areas shall be honored.

On Friday, April 20, Klaus Engel, Deputy Mayor of the Saarlouis District as the responsible school operator, Heinz Peter Klein, Authorized Signatory of LEG Saar, as well as Christian Konrad for the school management, the deputy mayor of the Community of Überherrn, pupils´ representative Michelle Dillschneider and parent representatives met at the school bus stops. There, they symbolically shovelled mulch around the newly planted honey locust or Gleditsia. Also present were the Director of the Amt für Zentrales Immobilienmanagement, Charlotte Kurtz, and village spokespersons. Musical support was provided by the school choir.

`We see the tree planting as a kind of active neighborhood assistance. If the trees make the school surroundings more attractive and provide shade, I am very happy`, said Heinz Peter Klein, Authorized Signatory of LEG Saar.

The new housing area Kollwitzwiese, which was developed by the SHS subsidiary LEG Saar, is located nearby the school. The building plots created there were mainly conceived for families and realized on an area of 25,000 sq.m. The new housing area is much sought after. Just now, the last purchase contracts are being prepared for signature. 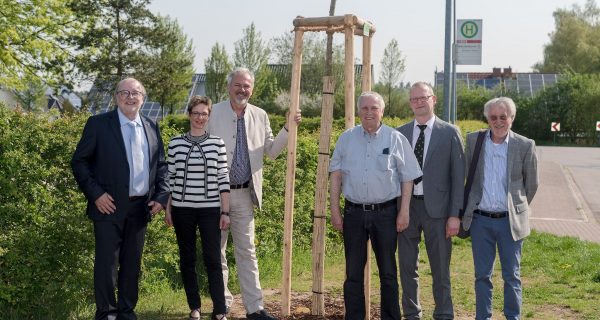