Holiday mood on the Schaumberg

The vacation destination of Saarland is getting a new showpiece: July will see the opening of the new Schaumberg Alm (‘Schaumberg mountain pasture’) on a 570-metre-high plateau near Tholey.  Across 600 square metres of space, operator Schaumberg Alm GmbH & Co. KG has constructed a collection of cabins in southern Bavarian style that can host up to 800 people (indoor and outdoor areas). As well as the existing mountain pasture buildings, there is also a very special structure – an original southern Bavarian reclaimed log cabin that has been renovated and moved to meet modern conditions on the Schaumberg. LEG Saar has provided co-funding, thus making a considerable contribution to tourism in Saarland.

The existing, once modern restaurant building with its corrugated iron and wood facade and its aluminium windows was no longer up to the demands of its new persona as a trans-regional event venue. This went for both its size and the number of people it could host (then only 45 guests). The new concept designed by Udo Winkler’s architectural team has optimised the facility by constructing a traditional 200m2 mountain pasture hut from high-quality reclaimed wood and extending the existing building by around 230m2 for kitchen and bar areas. The interior design and fittings are by Klaus Körner. In terms of construction, the building renovation and extension employed a wooden and steel structure and was clad in a uniform layer of horizontal old-wood weatherboarding. The roof of the mountain pasture hut and the all-round mono-pitch roof of the gallery have been covered with wood shingles. Striking wooden windows and folding shutters complete the overall picture. A sun terrace and a beer garden have been added to the east and west ends.

The Alm is surrounded by a two-sided gallery on the existing building, and a rustic wooden stage at the rear. The cosy panoramic lounge offers impressive views of ‘Saarland’s local mountain’ to the south out of its generously sized windows.

Total investment amounted to around 1.6 million euros, supplied by LEG Saar in conjunction with the Schaumberg Alm. As the tenant of Deutsch-Französische Begegnungsstätte Schaumberg GmbH (run by the district of St. Wendel and the municipality of Tholey), LEG in turn leased the complex to Schaumberg Alm GmbH & Co. KG.

Celebrating on Saarland’s local mountain
The operators are planning a wide variety of events such as après-ski or Bavarian sausage parties, as well as traditional brass band, rock, soul or even jazz performances. The menu will feature mountain delicacies and local tasty treats. The hosts set great store by fresh, regional produce. As well as lots of music events, there will also be opportunities to organise birthday, wedding or corporate celebrations. The company’s teams are already in the starting blocks and getting ready for everyday life at the venue. Its facilities (in line with modern gastronomy management) include an innovative kitchen and bar systems with electronic beverage dispensers that are also used at the Munich Hofbräuhaus. There is also a carefully orchestrated interplay between service and cuisine, enabling both drinks and dishes to be served quickly.

This means that the new Schaumberg Alm will be able to handle large numbers,but also look after the locals. The entire family is welcome to the Schaumberg Alm, from sausage-loving grandchildren and their parents right through to grandparents enjoying the impressive panorama.

Room for all
The Alm can hold 199 people indoors and 600 in the beer garden. There are broad panoramic views everywhere, surpassed only by the 37.5m-high disabled-accessible Schaumberg tower. The entire Alm complex pays close attention to the needs of disabled visitors, from barrier-free access to the restaurant and indoor areas through to suitably equipped toilet facilities.

The Schaumberg
At 569 metres high, the Schaumberg is known as ‘Saarland’s local mountain’. Located in the natural environment of the Prims-Blies hilly landscape, it is one of the highest points in Saarland and the emblem of the municipality of Tholey. History has been made on and around the Schaumberg for over 2000 years. From the 37.5m-high observation tower you can see across Saarland to the Palatinate Forest, Vosges and the Hunsrück.
The tower hosts two permanent exhibitions, one on climate protection and climate change and the other on the friendship between Germany and France. The Schaumberg plateau has been a German-French meeting point since 1976. The municipality of Tholey and the district of St. Wendel are its proprietors.

About the Manin Gastro Group
It currently employs over 170 staff at four venues in three locations:

As one of the largest and most successful catering companies in Saarland, the Manin Gastro Group also serves as a contact for banquets of all kinds, a large events organiser, a producer of many in-house products in conjunction with partner companies, and an innovator in numerous areas of gastronomy.

The new Alm was presented to the press on 26 April.
Statements:

Chairman of LEG Saar’s board and Saarland Secretary of State for European Affairs Roland Theis:
‘The Schaumberg Alm is an impressive flagship for the whole region. I am delighted about this outstanding contribution to further developing tourism in Saarland. Furthermore, the plateau’s new look, combined with the Schaumberg as a German-French meeting point and a place of international understanding at the heart of Europe, makes it an important trans-regional attraction.’

Valentin Holzer, CEO of LEG Saar: ‘As a competent and committed partner for the cities and municipalities of Saarland, the LEG has traditionally also targeted a wide range of tourist development themes with local measures. We are delighted to have been able to implement this pioneering project thanks to our co-investment hand in hand with the municipality and private operators.’

Cornel Hahnenberg, CEO of the Manin Gastro Group
‘The Schaumberg Alm is somewhere we have known since we were children, and where we can welcome visitors in the future. It is a project very close to our heart and will enhance our Gastro Group.’

Klaus Körner, funder and partner of the Manin Gastro Group
‘Come on in. Our motto for the Schaumberg Alm.

At home, with friends. Already on the way, a smile on your lips, full of anticipation for what awaits you. Wonderful views far across the valley. A rustic hut. Food like grandma used to make. A place that makes you feel welcome.’

Hermann Josef Schmidt, mayor of the municipality of Tholey:
‘I am sure that joining the Manin Gastro Group will provide a major boost to the Schaumberg Alm. This is thanks not only to the new operators’ gastronomic expertise, but also to the redesign and expansion of the guest area, which can now host entire coach tours.

LEG Saar represented a skilled, reliable partner, and I am very grateful for their commitment. Visitors should be delighted about the re-opening of the Schaumberg Alm. Its new profile and mountain flair will provide a positive boost to the entire region.’

Udo Recktenwald, administrator of the district of St. Wendel: ‘Alongside the Bostalsee reservoir, the Schaumberg is the district of St. Wendel’s second impressive flagship for tourist development. Its reinvigoration by a joint company operated by the municipality and district has provided a further boost to tourism and local recreation in recent years. With the new Alm, the Schaumberg is enjoying a revival that will attract visitors from near and far. A true tourist attraction and further proof of our region’s rapid, dynamic development.’ 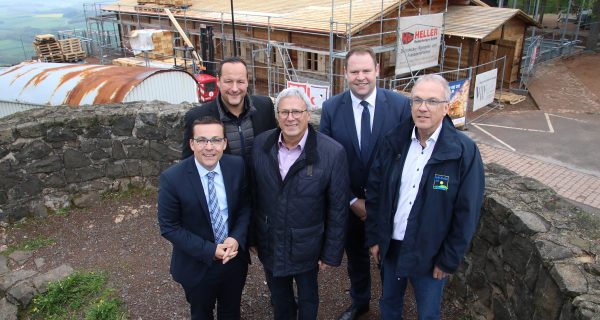