Mission accomplished: gwSaar hands over one of the last large Masterplan areas

An important private trading company in the German agricultural engineering sector is to settle at one of the last large areas within Masterplan Industrial Areas Saarland. We are talking about GRANIT PARTS, a subsidiary of the Dutch Fricke Group, which has decided on a 10-hectare site in the industrial park ‘Am Schaumberg’ near Tholey. As a wholesaler GRANIT PARTS supplies spare parts to agricultural machinery, horticulture technology and construction machinery dealers in Europe and will construct a logistics centre at the site. Approximately 200 new workplaces are to be created over time. This project was introduced today by Saarland’s Minister for Economic Affairs, Anke Rehlinger, together with the Managing Director of Fricke, Hans-Peter Fricke, the Managing Director of gwSaar, Thomas Schuck, and Hermann Josef Schmidt, Mayor of Tholey.

Minister of Economic Affairs Anke Rehlinger said in Tholey: “Once again this decision to settle at this location confirms that Masterplan Industrial Areas are providing companies with the right answers to their concrete requirements. The marketing situation shows we are doing it right: most of the areas have already been allocated. “All this is managed by the SHS subsidiary gwSaar, which uses the Masterplan settlement tool skilfully to carry out its mission. More workplaces have also been created here – benefitting this industrial location on the Saar River”. “I wish you and your staff a good start in Saarland! You will profit from our optimally positioned location”, the Minister then added.

“Our clients rely on the fact that we supply spare parts and accessories very quickly so that you can provide your customers with a rapid workshop service. In this regard a centrally located logistics centre like the one we plan to build here in Saarland is an important strategic step for us. Besides the construction readiness of this site we were convinced in particular by its location at the heart of Europe. From here we can supply our specialist trade customers in nearby France very easily but also provide an optimal service to our clients in southern Germany, Austria and Switzerland.” Hans-Peter Fricke emphasised.
The area ‘Am Schaumberg’ near Tholey/Theley has an extremely convenient location, right on the A1. This is where GRANIT PARTS plans to construct its logistics centre, initially on 20,000 square meters and later on 80,000 square metres.

gwSaar Managing Director Thomas Schuck explained: “We won our case against alternative locations in Baden-Württemberg, Rhineland Palatinate, Alsace and Lothringen. Obviously we had the better arguments. The area that the company has now decided on is one of the last available Masterplan areas. We are also already negotiating regarding the few remaining sites in the other industrial parks.”

“The planned settlement of Granit, a member of the Fricke Group, together with the creation of approximately 200 new workplaces and an investment of millions, is an important economic boost for the rural areas in northern Saarland and will substantially increase the economic strength of Tholey as a community – located directly adjacent to the motorway”, ensured the Mayor, Hermann Josef Schmidt. “The community of Tholey is very happy about this location decision by a successful company. The inclusion of the Theley area in the federal state Masterplan for industrial areas was absolutely correct. I would like to thank the Ministry of Economics and SHS for their excellent work in this successful settlement”.

Locations for trade and industry on the Saar River
Established in 2007 by the Saarland state government and funded by the EU, the Masterplan for Industrial Areas creates space for companies that are looking for a new headquarters or additional space. Previously it was rather unusual in Germany to be able to offer both smaller areas and large, coherent areas. Saarland was also able to score points with its combination of fully developed, individually subdivided, smaller or larger areas close to France and the Benelux States. The companies also value immediate availability and the uncomplicated and comprehensive advice and processing.
The concept has been successful; almost all the sites have been sold or are under negotiation. A total of approximately 2,600 new jobs have been created so far through companies settling on Masterplan sites.

Further commercial areas and property, from production and commercial halls through to office and laboratory areas, are on offer by gwSaar at >> https://portal.germanys.saarland.

About the Fricke Group
The Fricke Group was established in 1923 and has been successful in the international trade of spare parts, agricultural machines, commercial vehicles and horticultural technology in 21 countries and a total of 57 locations. This owner-managed group has its headquarters in Heeslingen, Lower Saxony and has 2,449 full-time employees, of which 194 are trainees.  >> www.fricke.de 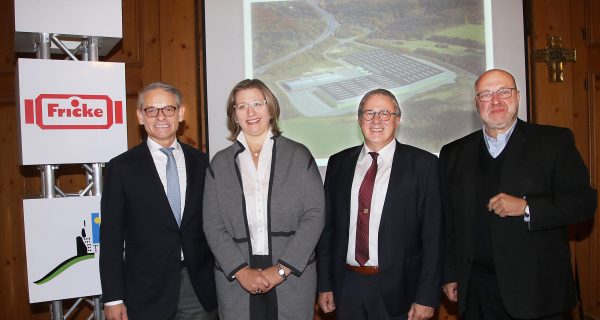