On 14 October,  Minister of the Interior and Building Reinhold Jost took a closer look at three major construction projects that SHS is handling for the Saarland police force. In the morning he learned about the progress of construction work for the PI Saarbrücken-Stadt police station, currently still just a shell. The visit began with a view from above, seen from the atrium of the police headquarters directly opposite the construction site. This was followed by a tour of the building shell, offering the minister a concrete picture of current activities.
SHS subsidiary LEG Service is erecting the new building (including an official multi-storey car park) on behalf of the state. This will stand on the area already occupied by the police on Mainzer Straße in Saarbrücken, St. Johann. It will bring together three police stations – Brebach, St. Johann/Karcherstraße and Alt-Saarbrücken – with a total of around 320 officials.

Ralf Stoll, head of the responsible section of the Ministry’s police department, is delighted that his colleagues who subsequently move offices will enjoy a fantastic working environment – including separate spaces for video-recorded evidence or for fingerprinting and photography procedures. The minister expects this new major police station to serve as a ‘national role model’. At the construction site, he also spoke of ‘enhancing the state capital with a view to further developing the district’.

In the afternoon, Jost inspected the Guy Lachman police centre in Kirkel. Once again, the minister was hugely impressed, as this sustainable construction project involves repurposing the existing building from the former Praktiker centre on Am Tannenwald, Kirkel. This is also being combined with the construction of a complex new hall and wing extension. Once again, SHS subsidiary LEG Service is responsible for project management and health & safety coordination on behalf of the client SBB.
Kirkel is thus gaining a modern police centre which will ultimately house a total of eight different offices. Across 20,000 m² of space, temporary areas will be established for up to 550 employees and a wide range of management tools and operational equipment will be added, including new vehicle depots and a kennel compound.

Jost was hugely satisfied with both projects: ‘The safety of people in Saarland is what drives us. This also means providing our police officers with ideal working conditions and a modern working environment. The two building complexes currently being constructed will significantly greatly optimise police activities and help to protect the entire region.’ 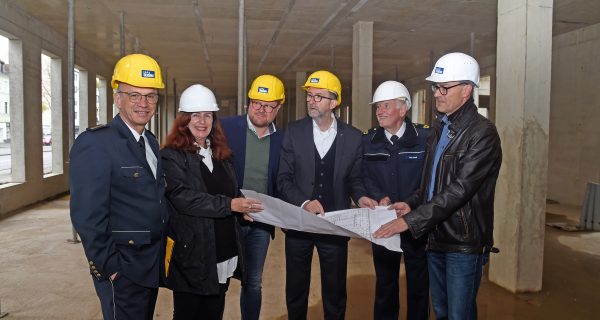