To better reflect the health situation in the Greater Region, and in particular the Moselle and Saarland administrative areas, stricter requirements have been implemented on the German-French border since 1 March. It is now only possible to enter Germany with a negative coronavirus test that is no more than 48 hours old, a rule that also applies to commuters.
Given this, in order to make border crossings easier, a German-French test centre has been set up with LEG Service as project coordinator. Right in time for the first test, it was opened on 2 March at 6 a.m. at the ‘Goldene Bremm’ Saarbrücken border crossing, on the Technisches Hilfswerk site at Metzerstraße 157. Prudent project coordination and fantastic collaboration between local stakeholders mean that the expected congestion has not materialised, and operations are working well.

Commuters needing to travel from France to Saarland can obtain a rapid antigen test here any day of the week between 6 a.m. and 10 p.m. The tests are mandatory and are available free of charge. They are valid in both Germany and France. As it currently stands, commuters travelling from Germany to France are not required to show a negative test.

To book an appointment:
https://www.etermin.net/SchnelltestGoldeneBremm/calserviceid/93733/221684?noinitscroll=1

All stakeholders are on the same page and view the test centre as a tool to avoid closing the border and border control between Saarland and Moselle.

The role of LEG Service: 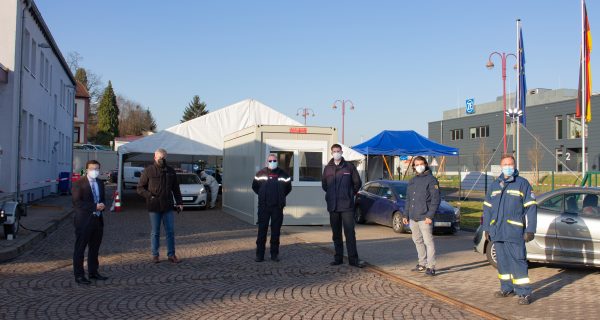