How Saarland is presenting itself as a hub in Munich

Saarland will be presenting itself as a highly efficient European hub at the Munich trade fair ‘Transport Logistik’ from June 4 to 7. Fourteen logistics companies, including state-owned organisations such as Saarbrücken Airport and SaarPort Hafenbetriebe, are exhibiting their range of services at the joint stand organised by gwSaar (Saarland economic promotion corporation).

The co-exhibitors at the joint gwSaar stand (Hall A5, Stand no. 313)

The Entrepreneurs’ Meeting on Thursday, June 6 will be attended by Saarland’s Secretary of State for Industry Jürgen Barke and members of the Committee for Economy, Labour, Energy and Traffic at the Saarland state parliament. An exchange will take place between the entrepreneurs on the current challenges of the logistics sector, moderated by ‘Sarah’, the brand ambassador for Germany’s Saarland. Cooperation with the French neighbours also plays an important role, whereby the potential for cooperation and business has by no means been exhausted. According to the Ministry of Economics there could be much closer cooperation in the area of digitalisation.
“Our federal state has always been able to win over logistics companies wanting to operate on the French and south European markets. The logistics sector on the Saar is well-positioned. And we want to further support its success”, said Secretary of State Barke, adding that both sides profit from the vicinity of the German-French border.

Thus, for example, the French pallet network Volupal included the Saarland service provider Bliestal Logistik as the first German partner in its network. Dachser is also one of the global players in Saarland. The company recently expanded its logistics centre in Überherrn near Saarlouis for the second time, growing to a contract logistics storage area of 62,000 square metres. It already found the right location there, at the Häsfeld Industrial Estate, at the beginning of the millennium. It’s no wonder as it is only just over 10 minutes from that site to the French border.
A search for available sites in Saarland is very convenient: “One phone call or even just a mouse click on our new web portal is enough to find a suitable plot – and get access to the entire potential of the SHS companies”, explains gwSaar Managing Director Thomas Schuck.

Barke and Schuck will also use the trade fair for conversations with several logisticians on concrete projects.

The right site at the click of a mouse
Suitable areas can be found on the web-based site research portal for investors and project developers portal.germanys.saarland, which is unique in Germany – recently awarded the ‘Standort Award 2019’ (Tage der Expansion, Frankfurt). It shows all the commercial and industrial land and real estate that is currently available in Saarland and simplifies the rapid identification of a suitable location – including the fastest possible, custom advice from the gwSaar support team. 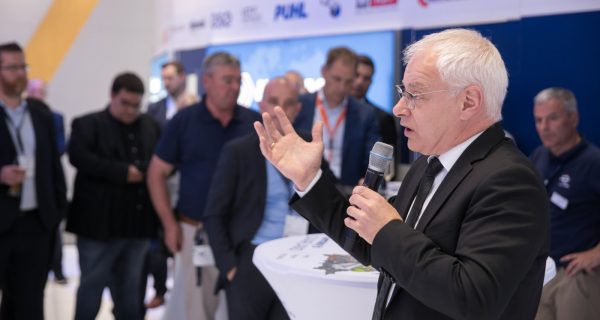