Eisenbahnstraße in the commercial area `Primsaue Nalbach` is being newly built

In Nalbach, the relocation of the Eisenbahnstraße in the Prims floodplains (`Primsaue`) has begun. LEG Service, a company of the SHS group, implements the project on behalf of the community. The measure is subsidized by the Saarland Ministry of Economic Affairs.

The official ground-breaking ceremony on Friday, March 11, was attended by mayor Peter Lehnert, Patrik Lauer, district administrator of the Saarlouis district, and Petra Berg (SPD) and Raphael Schäfer (CDU), both of them members of the `Landtag`

The road construction project is meant to revitalize and upgrade existing commercial areas in the south of the community on the city limits to Saarwellingen. According to mayor Peter Lehnert, the company Tritz Betonwerke was particularly hit by the previously difficult situation. `In the future, factory traffic and public transport will be unbundled, which will relieve the burden especially for the Tritz concrete works but also for other companies. In addition, the new routing of the road facilitates the further economic development of the Prims floodplains,` said Peter Lehnert.

The road will be relocated on a length of 530 meters, with a lane width of 5.90 meters. The road will have a sidewalk on one side and end with a turning area. Drainage will be done through gutters and drainpipes with a connection to a new rainwater channel. Responsible for traffic and drainage development is the Saarwellingen-based engineering office Schweitzer. The construction time is estimated at roughly six months. 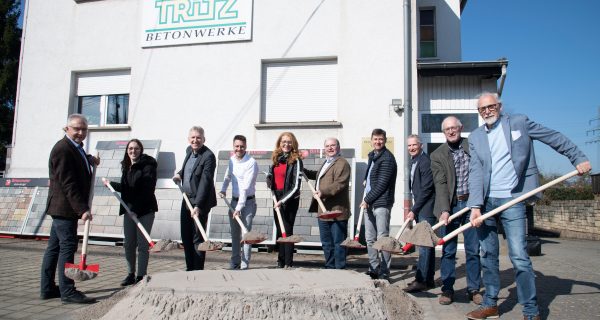