IKS Industriekultur Saar has constructed a new road section to achieve better accessibility to the South Campus of the former mining waste heap with a partially new structure. The road is not only used by the companies who are based there and by their suppliers. It is also part of the circular tourist route around the waste heaps, which is popular with hikers and cyclists. Today the company transferred the completed conversion and entire remaining road network in this section of the Göttelborn commercial site to the municipality in the presence of Christine Streichert-Clivot, Chairwoman of the Supervisory Board of IKS and State Secretary in the Ministry of Education and Culture.

State Secretary Streichert-Clivot praised this successful solution: “The last coal was produced at Göttelborn mine in the year 2000. Since then a lot of people have taken care of this location and developed it. We are very pleased with our settlement successes, which have made Göttelborn into an attractive commercial location. But we are also very happy about the large numbers of people who visit the spectacular Göttelborn mining and waste heap landscape. This new access road will connect the southern part of the former mining area for business investments and will increase its value. The stretch of road will also contribute to better utilisation of the local recreation potential at Göttelborn mine. It will bring new life to this old industrial area!”.

The Mayor Lutz Maurer emphasised the importance of the new road for the Göttelborn district of Quierschied: “The access route via the new road section ‘Zur Bergehalde’ not only increases the value of our municipality as a business location with a growing number of workplaces. It also creates improved connections within the popular local recreation area of ‘Saarkohlenwald’, which includes the circular route around the waste heaps that branches off here. That is particularly pleasing to us as the most densely wooded municipality in Saarland.”

Inopportune hairpin bend on the site

The growing number of company settlements brought increased traffic that was more than the old road route could withstand. This caused traffic and safety problems here and there. This was because the southern access route into the site had a double hairpin bend that became critical with regard to safety and capacity, particularly when lorries were passing one another but also with the combination of pedestrian, cycle and car traffic. In the winter months when there was more snow and ice the road route often caused problems with deliveries to the companies. Also the ‘Zur Bergehalde’ road will be the only access route to the southern section of the industrial area in the future because the bridge over the railway line is no longer available for public truck traffic.

The solution
IKS has therefore replaced the previous road route with a partial new structure that no longer needs the hairpin bend. In this way the industrial estate will now have access via public roads, as is the case elsewhere.
This will free up the previous road route so that it can be used as commercial area in the future and this in turn will lead to further revitalisation of the site. Supply lines and channels were moved at the same time and brought up to date while the road lights were also converted to modern LED technology in the non-converted section.

The new road was planned from mid-2016 onwards and was constructed between November 2017 and June 2018. This also includes assurance of the ecological balance and replacing the woods on the north side of the waste heap.

The total cost will be in the region of € 1.25 million. The state is making a substantial contribution here as the measure as a whole is being subsidised by the Ministry of Economic Affairs, Labour, Energy and Traffic with more than € 800.000 from federal state resources. These subsidies have made it possible to free the municipality from the expense of this measure. rb 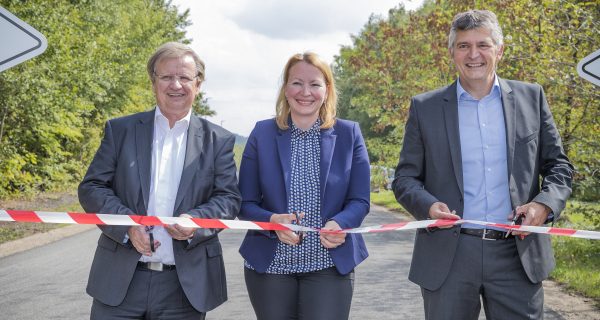