Sie sind hier: Startseite • Current news • `The one and only` – Start of the 38th film festival MAX OPHÜLS PREIS in Saarbrücken

Great cinema in Saarbrücken: The only explicit film festival for young filmmakers in the German-speaking area, the MAX OPHÜLS PREIS, celebrates its opening in the Saarland state capital on January 23. Already before, the film fans had stormed the Blue Hour to buy the much sought-after film tickets.

The 38th edition of the competition is managed by Svenja Böttger, a graduate of the Film University Babelsberg Konrad Wolf. She knows that the participation of young filmmakers at the MAX OPHÜLS PREIS is an important step into their professional future. Right from its start in 1980, the festival has been committed to the young German cinema. The festival sees itself as the main development platform for young filmmakers from Germany, Austria and Switzerland. Here, branch representatives can meet young talents and at the same time also watch their films.

The winners of the film festival are solemnly announced and awarded at the E-Werk on the Saarbrücker Saarterrassen. For this purpose, the Westside of the stylishly renovated industrial hall turns into the SHS Winnerslounge, sponsored by festival partner SHS Strukturholding Saar. The SHS Group also endows the prize for young actors. `We are happy to support the renowned Max Ophüls Festival. As the main forum for the promotion of young German-speaking film artists, the festival is very appreciated advertising for the location Saarland`, so SHS Managing Director Thomas Schuck.

From Saarbrücken to Hollywood?
Right now, one of this year´s films on competition has been nominated for an Oscar: the Swiss film La femme et le TGV, directed by Timo von Guten, with film legend Jane Birkin in the leading role. In Saarbrücken, the film competes in the category of medium-length films. In Los Angeles, it is shown as a short film

City of the blue hearts
Matching the annual festive atmosphere, the shops in Saarbrücken have decorated their windows and salesrooms in the festival colors blue and white, keeping with the motto Our Max Ophüls Prize. And also the blue hearts are omnipresent.

Max Ophüls
Name giver Max Ophüls (1902-1957) is one of the great European film directors of the 20th century. Born in Saarbrücken he had left his home town already as a young man to work at various theatres in Germany. In the metropolis of Berlin, he developed his first film works. In 1933, the film director with Jewish roots first emigrated to France, later on to the United States. In the fifties, Max Ophüls returned to Europe to carry out film and theatre projects in France and Germany. 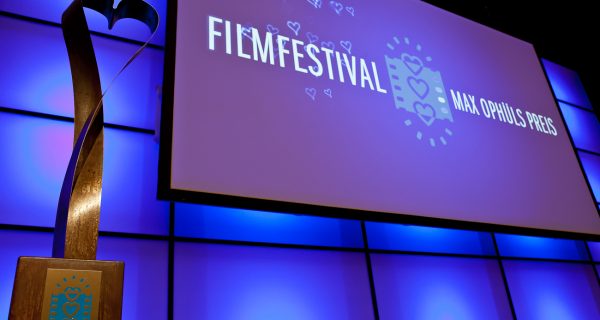