The Saarland University campus close to the Science Park Saar will soon be home to the university’s forthcoming ‘Innovation Center’. It was described as ‘the embodiment of exchange‘ by University President Manfred Schmitt after he and Prime Minister Tobias Hans broke ground to symbolically begin the construction work. SHS subsidiary LEG Service is responsible for project management and health & safety coordination as this approximately 3,500m2 building is constructed.

The decision was once again made to use the state’s very own Strukturholding Saar, which in conjunction with its subsidiaries is a capable partner for the speedy, cost-conscious development of complex construction projects. In this instance, LEG Service will be able to make a significant contribution to further developing technology transfer in Saarland.

The construction of this Center represents a significant step forward for technology transfer, as it will provide students, researchers, prospective start-up founders and business with an opportunity to benefit from creative exchange and networking, develop new ideas, and translate them into initial prototypes.
Another key player right by the campus is the >>Science Park Saar, where close collaboration between science and business is already an everyday occurrence.

The Innovation Center in its planned form will be unique in Germany, not least because the building will enable open interaction between the various departments across all floors. Points particularly worthy of mention include the nature of the forthcoming building in terms of its open design to inspire communication and creativity, as well as its multifunctional and flexible usage options.

Construction costs are expected to amount to around 17.2 million euros based on the current forecast and tenders. This forthcoming four-storey building will be funded by the European Regional Development Fund (ERDF) and by the state.

The embodiment of exchange
This will be a new central meeting point for students and researchers on the campus, with a creativity laboratory where new ideas can be developed and a fab lab for transforming ideas into prototypes. A coworking space and a demo centre will also be constructed where research findings will be presented to the general public in tangible form. In addition, there will be conference and meeting rooms for academic and social events. Furthermore, the Innovation Center with its ‘Living Lab’ will be another place where young people, prospective students and other interested parties can experience science and technology from up close in a fun way.

The four-storey building will be constructed behind the auditorium, close to the start-up centre and the Science Park. It will back on to Stuhlsatzenhausweg, which offers access to all of the non-university research institutions on the campus. A large screen will catch the eye on the ground floor: as well as displaying interactive demonstration films, this will also illustrate research projects and present new start-ups from Gründer-Campus Saar. 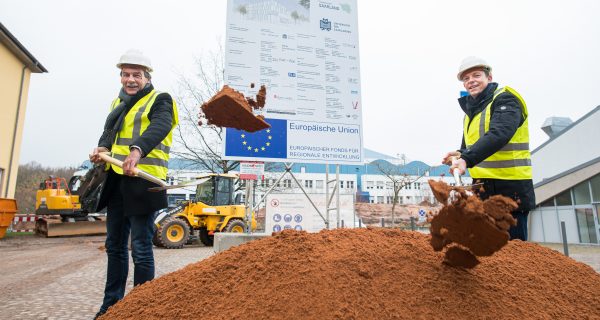