Once more, Germany´s Saarland presented its strongpoints in Seoul, Ulsan and Daegu, South Korea. From October 14 – 19, Saarland companies, accompanied by gwSaar and saaris, exchanged views on possible cooperations with Korean companies and institutes. Important stops were also the Korean tech fair KOSDAQ and the automobile fair DIFA with an own Saarland stand.
Given the current constellation within the EU, the personal contact with Korean business people can offer remarkable prospects for Saarland companies. For South Korea could be one of the countries representing possible alternatives for Brexit-related order declines, not only for the automotive industry.

In fact, this trip had set a focus on the automotive industry. Nevertheless, the Saarlanders got to know different industries during their time in Korea. So, for example, the delegation visited PowerfulX, a renowned player in the cosmetics industry. After another meeting in Seoul, with the KOSDAQ Association, the Saarlanders stopped off in the Southeast Korean cities of Ulsan and Daegu.

The partners met for the second time this year. Already in May, two business delegations from Ulsan and Daegu had visited the Saarland.

Company visits also took place in the university city of Ulsan, located on the Sea of Japan. Here, the delegation also paid visits to the Hyundai Heavy Industries Ulsan Plant and the Hyundai Motor Ulsan Plant. At the several hours´ conference on the Ulsan Science Technology Promotion Center, the Saarbrücken-based CISPA Helmholtz Center introduced itself.

Next stop of the trip was in nearby Daegu, with over 2.5 million inhabitants the fourth largest city in the Southeast of Korea. Here, the delegation from Saarland visited Daeyoung Chaevi, one of the leading companies in the field of high-performance chargers for electric vehicles. Also a meeting at the Daegu Chamber of Commerce and Industry with which the Saarland has been connected by a partnership since May was on the agenda.

A highlight in Daegu: Saarland´s participation at the DIFA 2019

Saarland products and technology can be found in every second German car. Given today´s changes in the auto industry, it is therefore particularly important to make Saarland’s expertise internationally visible. Against this background, organized and conducted by saaris, the Saarland presented itself at the DIFA 2019 -Daegu International Future Auto Expo. Besides the exhibits of Carlsson and INM, eyecatcher on the stand was the model of a `Saarland car` – a virtual car documenting the large number of Saarland automotive suppliers and automotive researchers. The virtual `Saarland Experience` celebrated its premiere at this year’s IAA and was now also used in an international context at the automotive trade fair in Daegu.
The business location Saarland was introduced on the parallel congress. With their high level of expertise, CISPA and paragon semvox outlined in their lectures the top-class knowhow existing in Saarland – here with reference to information security in automobiles (`IT Security Challenges in automobiles`, CISPA) and the natural and intelligent man-machine communication (geni: OS – An operating system for smart assistants, paragon semvox).

The exchange between Saarland´s and South Korea´s industry has meanwhile become a tradition. During various delegation trips to Seoul and Saarbrücken in recent years, contacts and connections have emerged from which both countries benefit today. The Korean research institute KIST Europe (Korea Institute of Science and Technology), for example, was established on the university campus in Saarbrücken.

As always on acquisition journeys, the gwSaar team had the business location Saarland and its advantages for investors `in the luggage`. Linguistically and concerning specific regional aspects, state-owned gwSaar is supported by its international network, which continuously ensures the perception of Saarland worldwide and actively appeals to investors willing to settle there. In this case, it is Martin Bernhardt, project developer, and the Korean Young Choon Park who support the Saarland business promoters onsite as active network partners. 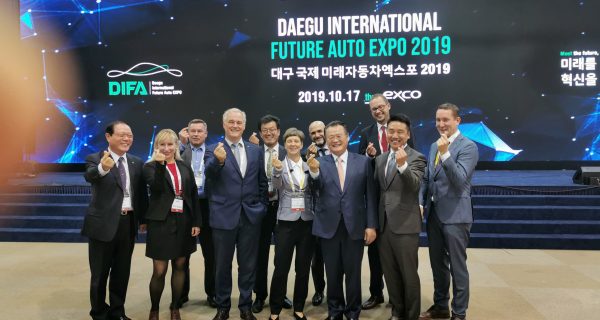