Together the Ministry for Economics, Labour, Energy and Transport in Saarland and gwSaar (Saarland Economic Promotion Corporation) invited guests to attend an open discussion group at the federal state’s offices in Paris. This was a group looking primarily at the future of logistics between Saarland and France. On Friday, May 3rd the Logistik Dialog Paris took place for the first time at the Bureau de la Sarre. What are the future challenges, but also the potentials of logistics in the cross-border movement of goods, taking into account increasing digitalisation? Entrepreneurs from the logistics sector in Saarland discussed these issues with their French partners.

In his welcome speech Saarland’s Economics Secretary Jürgen Barke said: “The potential for cooperation and business between the German and French logistics sectors is far from fully exploited. We can work together much more closely, particularly when it comes to digitalisation. In future we need to better utilise the location advantage of our optimum position in Europe and the good business relationship we have with our French neighbours. That is how we will be able to undertake a digital transformation in the logistics sector. I am pleased that we are going to tackle this challenge together and that we are collaborating at this event.”

Logistics in the border region

Saarland forms a cultural and economic link because of its ideal location right on the French border and with connections to Europe’s economic centres – but above all it is an extraordinarily strong trade hub. However the logistics sector, as a major player in the economy, currently needs to assert itself in relation to many challenges, such as digitalisation or the preparations that are already underway for a possible Brexit.

Strong partners are required
Saarland and France are connected by more than mutual history and a traditional partnership. Cooperation between companies in Saarland and France is also very vibrant. Thus representatives from various companies such as the French logistics services provider Volupal and its partner in Saarland Bliestal Logistik and the French rail freight transportation company Europorte made the trip to Paris. Further participants at the meeting in the Saarland offices were from LVS, Saarland’s state transport association, htw saar (University of Applied Sciences), Transports Da Soler, BahnLog, BahnLog France and Mosolf France.

Dr. Oliver Gausmann, economics expert and Managing Partner of Convios Consulting GmbH, spoke ahead of the discussion group on the topic of ‘Digital Transformation in Logistics – more Success through Cooperation’. Subsequent input came from Christian Schmidt, Head of Hardware Development at Qbing Industrial Solutions GmbH – a young company based on the InnovationsCampus in Saarbrücken. He spoke on the subject of ‘RFID Tracking in an in- and outbound supply chain’, technology for the automated and contactless identification and location of objects.

Both speakers provided plenty of potential for discussion and the discussion group was correspondingly lively with several companies wishing to continue the discussion independently of the event. They are also considering closer cooperation. What a great result from an event that took place for the first time in this form between France and Saarland.

Saarland’s office in Paris
The objective of Saarland’s Paris office is to present Saarland as a centre of German-French competence in the French capital. On the one hand Saarland would like to act as a bridge to Germany and therefore a political interface to the French government. On the other hand the state of Saarland sees itself as a gateway to France. Numerous events in the past have allowed the formation of a comprehensive network on site. Following a successful pilot phase the activities of the Paris office were made permanent and are to be further strengthened in the future. After all we all know that out of small acorns great oak trees grow.

As the only office of a German federal state in Paris it has become a place where German-French collaboration is lived out in the French capital.  rb www.facebook.com/bureaudelasarre/ 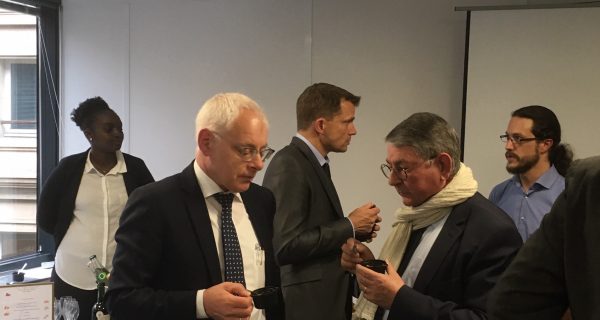