Two economic delegations are currently visiting Saarland from South Korea. Both of the visits, which are taking place independently of one another, aim to broaden existing networks for future business cooperation and to make new contacts. This manifested itself in the official signing of Memoranda of Understanding or MOUs. The partners see the documents as an official announcement of the mutual cooperation and the mutual support for technology-oriented start-ups. Organised by the gwSaar, Saarland economic promotion corporation, together with the IHK chamber of commerce and industry, saaris and KWT, two events took place yesterday, held in Korean and German, with high-level Korean and Saarland participants including Secretary of State for Industry Jürgen Barke.

VISIT BY THE DELEGATION FROM ULSAN

The first ‘Start-up Pitch Festival’ of the South Korean City of Ulsan and Saarland took place following the introductory speech by Prof. Markus Münter, htw saar. The aim of the event at Science Park Saar on the University campus in Saarbrücken was to communicate concrete information on both locations and the relevant conditions to companies from Saarland and Korea as well as support for companies who want to establish themselves. Thomas Schuck, Managing Director of gwSaar, Jongbog Kim, Director Department of business support agency, Younghae Kim, Chief of Center Ulsan CCEI and Taegue Kim, CEO of iPartners co, signed an official Memorandum of Understanding in order to affirm their future cooperation.
The brief presentations, or pitches, were used by these young start-ups from Saarland and Korea to introduce their companies and products. For example the company Herros Bio, which works on the optimisation of medications against chronic inflammatory illnesses, or MusiCards from Saarbrücken with its smart multimedia sharing. Ulsan Technopark was also presented. The Saarland company semvox paragon (voice control & proactive assistance) served as the best practice.
The delegation was provided with impressions of corporate and research activity in Saarland on the visits, organised by gwSaar, at: htw saar Informatik – Embedded Robotics Lab; CISPA, Instillo GmbH and KIST Europe Korea Institute of Science and Technology.

VISIT BY THE DELEGATION FROM DAEGU

Daegu is the fourth-largest city in the southeast of Korea and has a population of more than 2.5 million. The head of the delegation is Lee Jae-Ha, President of the Daegu chamber of commerce and industry and also the owner of Sambo Motors and Carlsson Fahrzeugtechnik GmbH in Saarland. Another 11 delegation members, mainly from the automobile sector, also travelled to the automotive stronghold of Saarland. Their programme began early in the morning with a visit to Carlsson Fahrzeugtechnik, a finishing partner for Mercedes-Benz and smart cars in Saarlouis, where the racing car appearance of the vehicles impressed the visitors.

Lee Jae-Ha, President of Daegu chamber of commerce and industry, signed a Memorandum of Understanding with the Saarland partners at the subsequent ‘Saar Business Get-together’ at the IHK chamber of commerce and industry – that is with gwSaar Managing Director Thomas Schuck and IHK Saarland-Vice President Thomas Hempel.
Secretary of State for Industry Jürgen Barke welcomed the lively exchange and said at the event: “Our industries in Saarland compare well in international competition. There is great interest, particularly from the Koreans, in strategic partnerships with our automobile sector, and industries in Saarland are also highly respected in Asia in other areas such as engineering, electrical technology, bio-technology and medical technology. Now we have the opportunity to open new doors and to invest at the same time in the future viability of our industries in Saarland.”

Following a brief presentation by the chambers of commerce and industry from Saarland and Korea the guests also received information on the supplier cluster Automotive.saarland. In order to give the visitors a compact overview of Saarland as an industrial location Youngchoon Park, the Korean representative acting on behalf of gwSaar, presented Location Germany’s Saarland. Afterwards gwSaar General Manager Schuck announced: “Contacts and good connections have been created based on the work of the gwSaar network partners on site and our activities and both countries will profit from this. For example both of these visits originated in our acquisition trip in March”.

Invitations also went out to entrepreneurs in Saarland for whom personal contact with Korean businesspeople could open up interesting perspectives. In many regards South Korea offers a possible alternative and a fallback option for reductions in orders caused by Brexit – not only for the automobile sector.
At the event Thomas Hempel stated: “We expect two concrete things for our members from the partnership with the Chamber of Commerce and Industry in Daegu, also an important location for the automobile industry in Korea: on the one hand we are opening up opportunities to speak about future cooperation and supplier relationships through direct meetings between entrepreneurs, which is a particularly interesting perspective given the prospect of orders lost because of Brexit. On the other hand we hope for adhesion effects from projects in professional training and further education and thus for a targeted contribution to the reduction of the lack of specialist workers.” 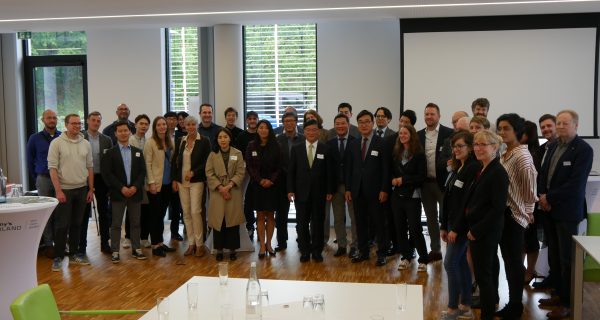