Living within your own four walls for as long as possible

Huge crowds for the grand opening on Saarbrücken’s Hohenzollernstraße: the AAL Network Saar and the WOGE Saar housing company for Saarland presented an AAL show apartment to the public on Wednesday.

‘Most people feel a strong desire to live within their own four walls – at every stage of their life’, says Prof. Wolfgang Langguth, creator of the AAL Network Saar which came into being at the Saarland University of Applied Sciences. Individual services, modern technology and intelligent networking can already be used to create new supply structures which enable independent living for as long as possible. ‘Ambient assisted living’ (AAL) represents concepts, products and services which incorporate new technologies into everyday life in order to improve the quality of living for people at all stages of their lives. This in particular applies to the needs of elderly or disabled people.

Visitors interested in the approximately 100m² show apartment on Hohenzollernstraße were thus able to experience how everyday life can be made easier with technical assistance. Using a tablet, Wolfgang Langguth demonstrated how to control the shutters, lights and temperature. He is convinced that even a small number technological aids could enable a third of people currently receiving in-patient care to remain at home.

‘Technology can help people live in their own houses for as long as possible’, stressed Elke Ferner, the Parliamentary State Secretary of the Federal Ministry for Family Affairs, Senior Citizens, Women and Youth, who came from Berlin for the inauguration. She agreed that the show apartment was a good way of enabling this, and praised the commitment of the AAL Network Saar and its CEO Prof. Wolfgang Langguth.

WOGE Saar placed the apartment at Hohenzollernstraße 113 in Saarbrücken at the disposal of the AAL Network Saar for them to realise their planning ideas. It has been split into two apartments: the first is a ‘high-tech’ version including the latest technical equipment and networking – drawing on the AAL Network’s expertise. The second apartment is the ‘everyday’ version of an apartment incorporating AAL elements.

‘As an example of our entire housing stock, what we are offering here is a realisation of the technical possibilities which are economically feasible under the equipment standards given’, explained Rita Gindorf-Wagner, CEO of WOGE Saar. ‘We are now awaiting reactions to the test apartment. If they are positive, technical changes will be made to all of our apartments if required.’

Those interested can view the show apartment at Hohenzollernstraße 113 in the Alt-Saarbrücken district upon consultation with the AAL Network (tel. 0681/5867446). 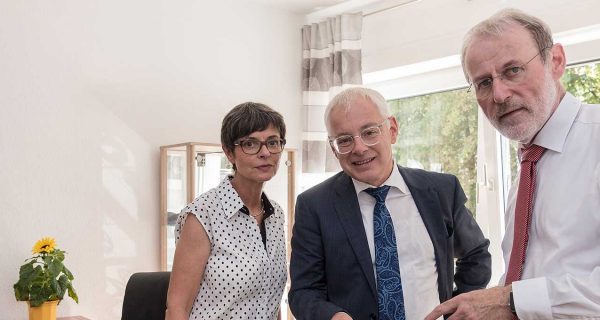