From SCN to the cultural centre of Kosovo

Flights now going to Pristina up to four times a week

Early in the morning on 22 July, the first flight from Pristina landed at Saarbrücken airport. The airport fire brigade gave the Airbus operated by the Croatian airline Trade Air a traditional welcome with a water fountain.

MyWings Aviation, which is operated by the Croatian airlines Trade Air and ETF Airways, is now flying from SCN to Pristina up to four times a week.

With more than 145,000 inhabitants, the capital of the Republic of Kosovo is the largest city and municipality in the country. It lies east of central Kosovo in the historic landscape of the  Kosovo field. The city is surrounded by the region’s fertile plains, with only the Zhegoc hills rising to the east.

Nevertheless, the flight service is primarily aimed at people wishing to visit family and friends, as well as employees from the region who live and work in the Saarbrücken airport catchment area.

Flights can be booked at 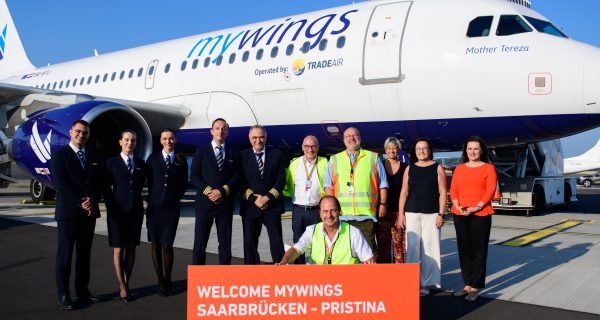