Foundation stone for the extension of CISPA was laid

The CISPA Helmholtz Center for Information Security on the university campus is being expanded by a building. On Thursday, March 10, 2022, Saarland´s Prime Minister Tobias Hans, State Secretary for Economic Affairs Jürgen Barke, and Prof. Michael Backes, founding director and CEO of CISPA, laid the foundation stone for the new research and office building. SHS Strukturholding Saar is the client, its subsidiary LEG Service manages the project controlling.

The new building provides room for roughly 170 researchers and is urgently needed. Due to a continued quick growth of CISPA, employees had to be spread across several locations in the last few years, which is particularly challenging for day-to-day cooperation.

Prime Minister Tobias Hans: `The CISPA has developed from a project of the Federal Ministry of Education and Research (BMBF) into an international research center of wide reach. Despite currently difficult general conditions due to the pandemic, CISPA is on a growth path. Financed by the federal and Saarland governments, this building marks the beginning of the planned spatial expansion of CISPA towards an innovative high-tech research campus.`

CISPA founding director and CEO Prof. Michael Backes: `Today’s laying of the foundation stone is a milestone in CISPA’s history of rapid growth. The new building is being created as a precursor of a huge research campus that will provide space for innovative and modern work and life.`

Besides a large data center, the new building includes around 170 office workplaces, three big meeting rooms and a foyer offering space for science receptions and other events. The canteen, which also makes part of the building, has 250 to 300 seats, so that in the future between 800 and 1,000 people can dine there every day.

SHS was already in charge of the comprehensive tendering procedure. Its subsidiary LEG Service supervises the project by extensive project controlling. After all, the project goals shall be met and the building handed over to CISPA in August 2023. 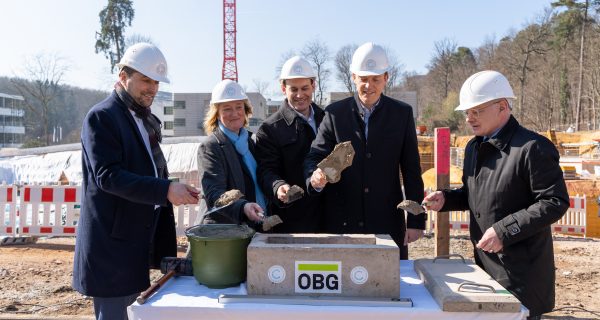