The extensive work on the site is in full progress. In March 2014, state-owned gwSaar had launched the development of the area. A good time for gwSaar to present the status quo of development activities on the Zunderbaum. `The industrial area will stimulate the economy in the Saar-Palatinate area and, thus, also foster growth and employment. The industrial area Am Zunderbaum is a piece of the future for the whole region`, Rehlinger said.

The conversion of an area

The scenario involves the conversion of the former Bundeswehr storage area Am Zunderbaum, which is situated in between Homburg and the A6, into an industrial park. To prepare and develop the area for new companies, gwSaar had launched the demolition work in April 2013. In June of that same year, blastings were carried out. Costs of all conversion measures are roughly 23 million euros. From fall 2014 at the latest, but also already parallel to the development measures, the first companies can erect their new buildings. The project is also supported by the EU. The activities of the Masterplan Industrial Areas Saarland are cofinanced by the European Fund for Regional Development (EFRD). `Together, we will make a former military depot Saarland´s second largest industrial area`, says Thomas Schuck, Managing Director of gwSaar. `Our task is not only to develop the area but also to provide assistance to companies relocating here`. In doing so, the SHS subsidiary contributes to the creation of new jobs in Saarland.

Development in this context means the installation of a complete infrastructure such as the installation of pipes (almost completed in the southern part), roadways or supply lines e.g. for electricity, gas, water and telecommunications. Also the terracing work is nearly finished. It is expected that the development of the Zunderbaum will be finalized by the second quarter 2015. In the meantime, the construction workers saw themselves confronted with special challenges. As is surely the nature of a former military depot, several bunkers had to be removed whose structural characteristics had complicated this taks considerably. Even with the help of a heavy excavator, it took several days to do so. Nevertheless, the crew onsite is well on schedule. And also the cooperation with the contracting companies, e.g. STRABAG, is excellent.
Today´s event takes place on a surface where a former tenant on the area has become established now. From the hills to the south, which are composed of removed topsoil, the overview would even be better. All in all, 35,000 tonnes of earth, or, in other words, the content of 2000 trucks that were moved here to create new plane surfaces on the now exposed sandstone, were removed.

On the attractive and conveniently placed area, four large surfaces from 1,500 sq.m. to 10 hectares are offered by gwSaar. Of course, these surfaces can also be subdivided irrespective of the current situation and as requested by the investor. Five companies, all of them former tenants on the area, have already acquired their sites and existing buildings and become re-established here. This only concerns the southern part of the area. As the companies had already been based in Homburg/Kirkel before, gwSaar has positively supported their further development. Moreover, gwSaar is in the final phase of negotiations on four sales contracts on surfaces totalling 40,000 sq.m. of land. More corporate enquiries involving a surface totalling 140,000 sq.m. have been submitted to gwSaar.

After the demolition of 46 buildings, the experts on the site will re-use the demolition waste as far as technically feasible and as far as admitted in a water protection area.Other waste arising from the elaborate demolition but not being suitable for re-use was analyzed, classified and prepared for other use, processing or dumping and disposal by the experts of gwSaar, LEG Service and the LUA Landesamt für Umwelt- und Arbeitsschutz. In the areas of planning, support, project management and facility management, LEG Service is the central service provider within the SHS Group, and, thus,also for the SHS subsidiary gwSaar. So, the two SHS subsidiaries ensure an efficient use of resources during the area´s revitalization.

The Masterplan area GI Am Zunderbaum is located directly at the B423. Homburg is a transportation hub on the A6 and A8 on the routes Mannheim – Paris respectively on the axis Paris-Saarbrücken-Frankfurt and Trier – Karlsruhe. The motorway can be reached within minutes without crossing town. In terms of traffic, the area is ideally suited for industrial operations.The Industrial Areas Masterplan SaarlandApproved in 2007 by the Saarland Government, the Industrial Areas Masterplan Saarland has the objective of developing four large industrial areas totalling over 200 hectares into different prime locations in Saarland by 2020. In charge of marketing is the SHS subsidiary gwSaar. 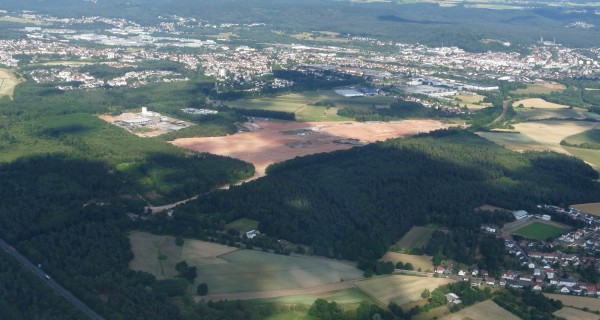