The Saarlanders´ passion for travel is unbroken: Last weekend, 8200 visitors streamed to the SCN Reisezeit travel fair at the terminal of Saarbrücken Airport, among them also many guests from neighbouring France. About 25 per cent of the passengers starting from SCN are French. `Our airport scores with bilingualism. We are Germany´s most French airport. Our aim is to increase the share of French passengers to 30 per cent`, so Economics Minister Anke Rehlinger during her tour of the fair. Therefore, this year´s SCN Reisezeit also included a Quartier français with four French tour operators and a bistro.

The 40 exhibitors on the fair were highly satisfied: Many visitors took the chance to get comprehensive information on the travel opportunities from SCN and do their bookings immediately. So, they could benefit from attractive early-bird discounts. Also SCN Managing Director Thomas Schuck showed himself satisfied with the response. `In the new year, the number of flights at SCN will be raised significantly`, he said. A preview of the flights for the upcoming summer schedule shows that, from April to November 2017, the number of chartered flights per week has increased to up to 35 (in 2016: 27 flights per week). For the first time, Eurowings (part of the Lufthansa group) will fly Majorca four times a week, thus increasing the number of weekly flights to this Mediterranean island from 17 to 21. Another reason for optimism is that the tour operators continue to rely on Turkey namely Antalya. As last summer, Sun Express will offer four weekly flights to Antalya from SCN. As a new feature, also the Turkish airline Pegasus will fly there twice a week, and Turkish Airlines will offer flights to Antalya in October 2017.

With Burgas on the Bulgarian Black Sea coast, SCN will offer a new destination. `We have every reason to be optimistic for the upcoming summer season`, Schuck said.

With 13 starts from SCN per week – 7 to Majorca, 4 to Greece (1 x Kos and Rhodos, 2 x Heraklion) and 2 to the Canary Islands (Fuerteventura and Las Palmas) – TUIfly will remain an important partner next summer.

Furthermore, there will be three special DERTOUR flights to Italy: to Napels, Sicily (Catania) and Sardinia (Olba). Also a pilgrim flight to Lourdes in the French Pyrenees is scheduled.

However, the SCN Reisezeit also convinced by its special ambiance: Besides the Quartier français, also a Fernweh Lounge with cocktail bar and reggae musician on the gallery of the terminal attracted the visitors. Additionally, the airport team had prepared an extensive support programme with expert lectures, entertainment for the children and Bachelor Jan Kralitschka. Last but not least, the fashion shop Zanamo Airport celebrated its opening in the terminal during the fair. 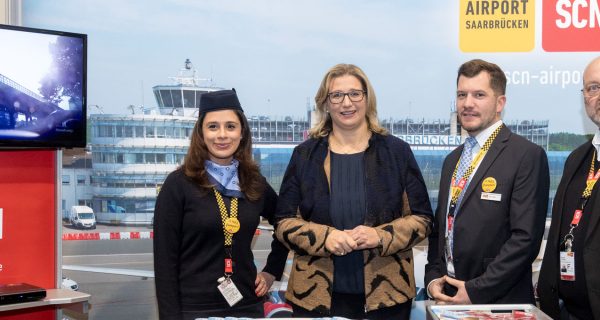